Approximately Arrive at Melnik. Visit to the Kordopulov’s House

The Kordopulov’s House was built in 1758 and it is named after the wine merchant Manolis Kordopulov to whom it once belonged. The curious fact about the house is that it is supposed to be the biggest residential building on the Balkan Peninsula from the Revival Period. The pearl of the house is the reception room having twenty-four windows with Venetian stained glass facing the four directions of the world. What also can be seen is the enormous wine cellar equipped with special canals and ventilation.

Free time in Melnik – The smallest and most romantic town in Bulgaria.

Three-course lunch at the Rozhensko Hanche.

The Rozhen Monastery is the biggest sanctuary in the Pirin region and one of the few Bulgarian Monasteries of the Middle Ages, which has survived relatively intact up to present days. Besides well-preserved wall paintings, the monastery is famous for its stained glass (the oldest of its type preserved till present days) and unique woodcarvings. As other monasteries, the Rozhen one also has its miraculous icon-protector, of Virgin Mary, which is kept in an ark in one of the chapels of the complex. According to the legend, the icon is one of the few copies of a sacred iron, owed by a widow of Nikea (Greece). During the times of the Byzantine’s emperor Theophilus, famous for his persecution of icon worship, the widow threw the icon into the waters in order to avoid its being destroyed by the emperor. The icon did not sink but sailed for years and in 999 it reached the gates of Iviron Monastery in Greece. 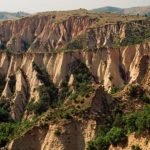 Enquire for this Tour (Melnik and Rozhen Monastery tour from Bansko)