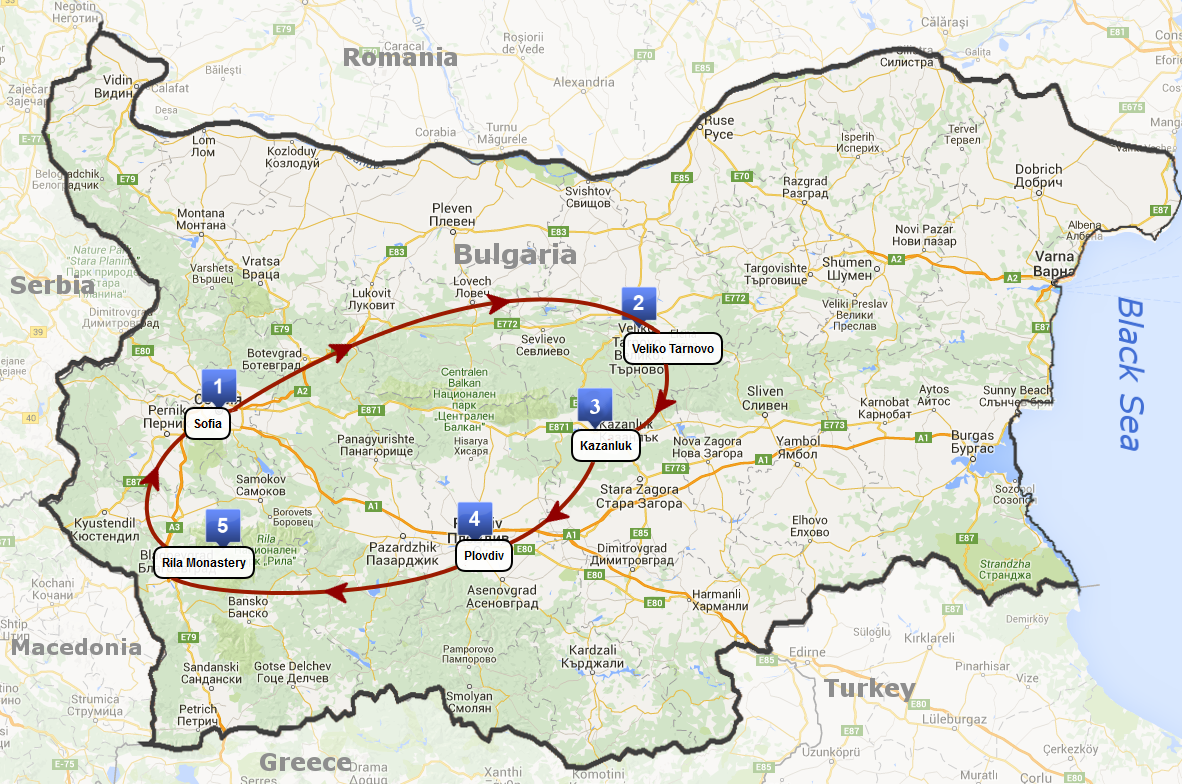 Tour with guaranteed departures in 2020:

Arrival to Sofia. Transfer from the airport and accommodation at centrally located hotel in Sofia.

After breakfast – meet your tour guide for panoramic tour around the Bulgarian capital (an 8500 years old city!) and visit to the most interesting historical sights: the Alexander Nevski Cathedral, the St. Sofia Church, which had given the name of the city, and the historical and cultural center of the capital.

Departure to Veliko Tarnovo – the capital of the Second Bulgarian Kingdom. Free time for orientation tour around the city. Accommodation and overnight in Veliko Tarnovo.

After breakfast – panoramic tour of Veliko Tarnovo with visit to the historical hill Tsarevets with the Fortress, the Patriarchal church and the Emperor Baldwin’s Tower. You will also have a walk along the old Trade Street – “Samovodska charshia”.

Departure to Etara – an unique open-air museum, recreating the way of life of the Bulgarians in the 19th c. It is a great attraction for tourists, one of the most visited places in the country.

Set off to Kazanlak – the capital of the Rose valley. Visit the Historical Museum, which houses collection of bronze and gold treasures and the replica of Thracian Kazanlak Tomb as well, dating back to the 4th c. B.C. It is listed in the world natural and historical heritage of UNESCO.

Accommodation and overnight in Kazanlak.

After breakfast – we continue exploring the Valley of the roses with visit of Skobelevo village. Here is located the Ethnographical Complex “Damascene”, which works also as a family-run rose oil distillery from more than 20 years. The hosts will show you how the famous Bulgarian rose oil (used in the perfumery) is produced.

Departure to Plovdiv – the “City of the seven hills’’. Plovdiv is the oldest city in Europe still existing today. It was called Philippopolis in the IV century B.C. in honor of King Philip II of Macedonia. Today Plovdiv is a cultural center of Bulgaria and selected as European Capital of Culture for 2019.

Walking tour of the Old Town of Plovdiv, impressive with the houses-museums of the Revival period like the Ethnographical museum; the Ancient Theater, the Fortress walls, the oldest church in the city – “St. St. Constantine and Helena”, etc. We will see the Muslim temple Dzhoumaya Mosque and the Roman Stadium on the main street of Plovdiv.

Optional: Wine tasting in the boutique wine-cellar “Todoroff”, near to the village of Brestovica, where a red wine of high quality is produced.

Accommodation and overnight in Plovdiv – hotel Expo 3* or similar.

After breakfast – take off to the Rila monastery. Founded in 10th c., it was the biggest Bulgarian medieval spiritual centre with rich collection of icons, wall-paintings, old-printed books – some 15 000 volumes. Guided tour around the monastery. The monastery is an UNESCO – monument and it is situated in the highest mountain on the Balkans – Rila Mountain, with its top peak “Moussala” at 2925 m.

In the afternoon – return to Sofia for accommodation and overnight.

Day 6Flight back home (B)

FIT Privately escorted tour prices valid for any date in 2020

Enquire for this Tour (Highlights of Bulgaria)